Ding Dong The Case Is Dead 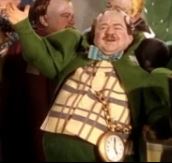 Praise be to God! He has heard the prayers of countless Christians for decades and he has answered. It was God who accomplished this. Sure, we can see the mechanics of it, but the way it all fell together is nothing short of providential ordering in answer to prayer. Who would have dreamed that Trump would get elected? Who expected him to do exactly what he said he would do in appointing certain judges, when no other conservative politician ever followed through on what he said so fully? Who would have dreamed that a cancerous and sickly Ruth Bader Ginsberg would hold on to her seat and die in it instead of stepping down when Obama was in office? Who could have guessed that Mitch McConnell would put the procedural choke-hold on Obama’s selection of Merrick Garland for a whopping 11 months until the next president came to office. If even one of those things didn’t happen, we would not be here today dancing and skipping and throwing a celebration worthy Munchkin city. The Lord has done this in answer to prayer.

But the Oz parallels don’t stop. Remember what happened even as the Munchkins were still singing? The wicked witch of the west showed up. Ah, yes. Our job is not done. A gigantic battle has been won, but the war is not over. This fight moves closer to home. Now each state will be deciding what to do with the unborn. And all of a sudden we are sobered up.

For us Kansans, we hardly get to finish our cake and sweep up the streamers before the next battle is upon us. In just over a month we will be voting on an amendment to our state constitution that will remove protections for abortion. Do you remember what that amendment is called? It has an amazing title. It is a title that opponents don’t even want to speak. Just this morning, I was listening to a radio show that was talking about the fallout from the Roe reversal for liberal churches in Kansas that support abortion. They were all saying how people need to support abortion by voting NO on this amendment. But I began to listen closely. Not a single time did they mention the name of the amendment. Not once. Isn’t the name important so we know what amendment we are talking about? Not this time, because this amendment is titled “Value Them Both.” They wouldn’t even say that.

Why will they not give value to unborn life? There is only one reason. When people reject the God of life and his Lordship, the de-valuing of life follows. Death will find its way into everything. If God is not seen to be the creator and giver of rights, then something else will take that place. Normally it is the state. But when the state becomes the giver of rights, it also become the taker of rights. And not long after that will you find oppression and death on the way. You can see this throughout the history of mankind, and such has been the case for 50 years under Roe. The state took away the rights of the unborn in Roe v. Wade, and 63 million children died. Now that Roe is dead the question of who gives rights is before the people of each state at their local level. Is the right to life something that can be voted on? Not ultimately. The final Judge will bring a reckoning to all who thought so. Nevertheless, it is going to be voted on, and since that is the case, let us vote to affirm the God-given rights of the unborn.

To help you dialog about this better, and because what you do has much more impact since this is now a state issue instead of a federal issue, I want to give you a couple more tools to fight for life. First, it will be helpful to learn a simple outline to make the case in under a minute.

The blog Stand To Reason offers a helpful way to do this.

State your case: It is morally wrong to kill innocent human life.

Defend your case: A baby in the womb is an innocent human life, distinct and whole, because one’s humanity doesn’t change or diminish due to Size, Level of development, Environment, or Dependency (S.L.E.D.).

Now, to argue this as a Christian you will need to add that the only reason there is such a thing as “morally wrong” is because God has declared it so, and that each human life is precious because it is made in the image of God. These truths will resonate in all those who have not seared their conscience.

Let me give you two more compelling arguments against abortion. First, the matter of “full equity” for women is a key point abortion advocates use to protect abortion. But this isn’t the first time “full equity” has been used to deny the rights of a whole class of people. “Full Equity” was used for the constitutionality of slave-owner rights. The only way that the slave-owners of the south could be as free and independent as possible was to deny the rights and personhood of black people.

In Mississippi’s Declaration of Succession it says: Our position is thoroughly identified with the institution of slavery — the greatest material interest of the world… It is not a matter of choice, but of necessity. We must either submit to degradation, and to the loss of property worth four billions of money, or we must secede from the Union framed by our fathers, to secure this as well as every other species of property.

Can you see what is said there? The slave-owner’s material interest was at stake and to lose the ability to subjugate and kill black people would lead to their “degradation.” If your equality depends upon the death of another person, then your equality is farce. It is an assertion of superiority over those you kill even though equality is being heralded.

Secondly, in a telling article by a lady named Emily Jashinsky, she states the following:

Janet Yellen, of all people, once co-authored a paper for the leftist Brookings Institute that determined legal abortion increased single motherhood. This may seem counterintuitive. But with easy abortion access, casual sex increased, leaving more women pregnant outside of marriage or other committed relationships… Legalized abortion enables men to engage in the kind of sex that hurts women… abortion also causes physical and psychological scars that haunt women for years after the procedure.

Abortion is touted as bringing equity to women who can consequently be as un-pregnant as men. But in reality, the abortion culture doesn’t only kill children. Women have been massively hurt by this culture of cheap, commitment-free sex with the guaranteed backstop of abortion.

So, take these additional arguments and go back into the battle. It is closer than ever, and your voice has more impact than ever. Ding Dong the witch is dead! Praise the Lord! But her evil sister still lives and needs to be doused as well.

Fear Doesn't Disappear, It Is Replaced